Stubborn as ever, Melody is pushing us around and when her legs don't do what she tells them, she leaps forward. Such a fighter! 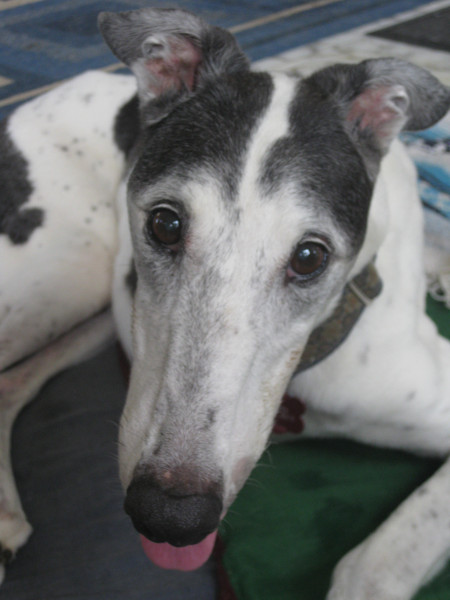 We went to the vet this afternoon because Melody was having a lot of trouble walking and looked like she was breathing heavily. They took X-rays. Turns out she'd just over-exerted herself and her lung function was much better than two days ago. The pneumonia had cleared up nicely.

Unfortunately this meant you could see the tumor in her lungs. It's no surprise, really. Dogs don't get pneumonia unless they're immunocompromised. And cancer is a leading cause.

Six months ago when she was diagnosed with osteosarcoma and we had her foreleg amputated, we knew the chances the cancer would come back were good. But we knew if we bought her a few more months of life, it would be worth it. She has spent those six months healthier and more active that she'd been for the last two years. It was definitely the right decision.

Now she's got a tumor in her lungs and also there is a mass in her hips that is making her uncoordinated. We have no idea how quickly things will spread. We have meds to help with the pain. But for now, she's eating and drinking and getting up on her own and going outside and even showing some joy when she isn't exhausted.

So it's a waiting game. We really thought today was going to be the end. But she rallied at the vet's office. Who knows how long we have with her. All we know is that she's going to get liver and chicken thighs and love and scritches until she tells us it's time. 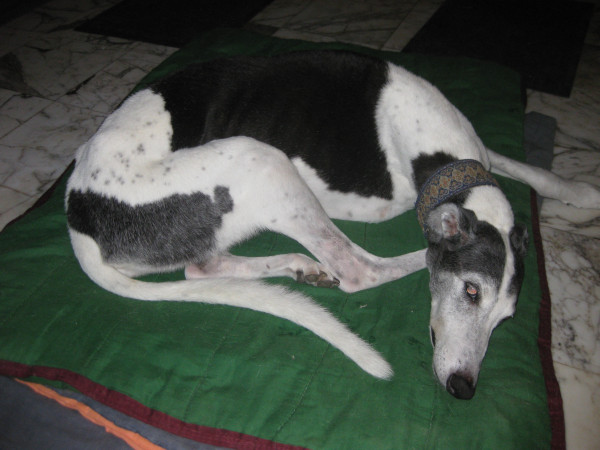 Well, she's eating like a horse. She went through an entire package of chicken thighs yesterday and ate a beef liver today so far. But she's not drinking. We literally have to force water on her. It's weird. But we're doing it.

She's clearly uncomfortable. She pants until she's exhausted and then she falls asleep. I'm sure she's in some pain although she is on pain meds. It's not severe yet though, thankfully.

And she's still happy enough to tell me off from time to time. Typically, it means she has to go out. I don't know why she feels the need to yell at me for ten minutes before she gets up and goes to the door. But that's her process.

She is staggering like her back legs are drunk or she has some kind of palsy. It's clearly not just muscle weakness like we thought. She seems unable to control her back feet. Instead of walking properly, she doesn't lift them up enough and ends up stepping on her toes or dragging a foot. I have been shepherding her when she goes out so she doesn't vere into the pool because her trajectory goes a bit sideways. Her front leg seems to be fine. And of her back legs, clearly the left (the one we thought she hurt three weeks ago) is worse than the right. But both aren't operating correctly at all and it's probably a tumor pressing on her spine.

But... I'll fight for her and serve her every wish as long as she's happy to push me around. When she tells me she's in too much pain to handle, then we will know.

I'm sleeping (or rather lying awake) on the couch downstairs again tonite because Melody isn't getting her feet under herself and I'd rather not come down in the morning to find she'd hurt herself on the marble steps or something. As opposed to last night, she seems calm and comfortable on her couch. She's panting a bit and she's pissed off as usual. But every time she bitches at me, I take her outside, which means getting off the couch and she hates that. So maybe tonite she'll actually sleep and not bitch at me every few minutes all night long.

She's retaining some fluid in her feet so we'll be going to see the vet in the morning. I'm not too concerned, though. This happened after all three of her surgeries too. She's drinking plenty and doing her business regularly so there aren't any kidney issues (and her kidneys tested normal last Friday). And now that she's eating heartily, I'm not too concerned with her leg weakness. When she gets up, she's staggery. But the more she walks, the more she improves. Then she lays down for a while and it all goes back to zero. So if the doc wants to prescribe a diuretic, I'm sure that would help. We're clearly on the road to recovery here.

Oh, but there's no way she's eating rice. We thought we'd slip some into her food as a way to get weight back on her quickly. Even buried the chicken under the rice so she'd have to eat the rice to get to it. No. She digs the chicken out of the rice and eats only the chicken. Then she licks the chicken juice off the rice. No empty carbs for the Mei-mei!

I gotta tell ya -- I'm really looking forward to her being better and me being able to get back to writing. I was planning to finish one of my stories by the end of this year, but there's no way it's happening now.

Bob has been on the phone with a new customer today. It's her first time making a corset and she's "checking" each step with Bob. Which is fine. It's underwear. You know about Bob and underwear, right?

She just said to him, "What time is after hours for you? I don't want to call you after your quitting time."

Bob told her to call whenever she needs him. If he can't pick up right away, he'll call her back as soon as he can.

It is just really nice to be asked.

Although I've been eating pretty horribly and not paying too much attention to working out since Mei-mei has been sick, I noticed this morning that I appear to have less back fat than I did a few months ago.

I have been doing my best to walk every morning (although I'm only averaging four times a week).

I'm not going to weigh or measure myself or compare photos of myself just in case it isn't true. But I am going to allow it to motivate me to walk every morning without fail. =)

Over these past few days worrying about Melody, Bob and I both experienced arthritis in our hands, forearms and elbows. You know, the arthritis that hasn't bothered us since we moved to sunnier climes. My shoulders, upper back, and upper legs are even sore like I worked out too much or something. All of it attributable to nothing but stress.

My goodness, I'm glad this is over!

Melody has pneumonia, not metastatic cancer that's reached her lungs. Very relieved at the moment, even though she's showing no interest in food. We really though we were going to say goodbye to her this morning, but her bloodwork is all clean except for an infection. Azithromycin to the rescue!

She must be feeling better. She giving me hell!
Collapse